I've been meaning to add something to Poetry Friday for a long time now, but I don't read much of the stuff. Since this is a picture book with rhyming text, I'm calling it poetry. 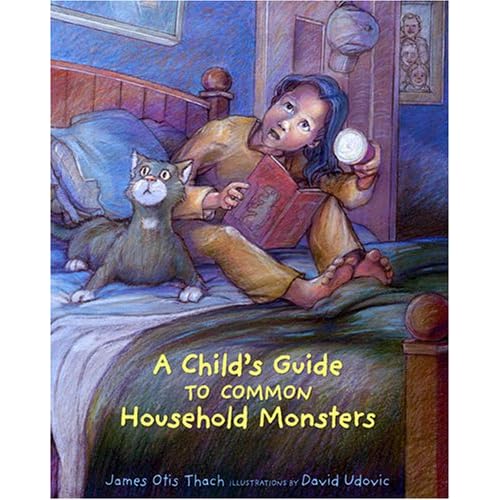 Late at night, a little girl sneaking a midnight snack hears creepy noises. It’s probably the wind, right? Or the cat! But the author assures us:

But now perhaps you’re old enough to finally know the truth,
Your house is full of monsters, from the basement to the roof!

Knowledge being power, the girl steels herself to peek underneath her bed at the gangly, orangutanish monster who lives there, eating her socks. He’s not so bad, but what about the monster in the closet? Each monster is terified of the one who comes next, until the final basement monster. And who is the basement monster scared of?

This picture book combined clever poetry (the slightly clumsy rhyme of truth/roof is made up by the kooky turn of phrase about “music to his nose”) with a common preoccupation among the audience and a reassurance that nobody is ever as scary as they seem, once you get to know them.

Luckily, they matched the cute story with gorgeously detailed illustrations. One thing that I noticed on my third or fourht perusal was that once the little girl meets the monsters, they are drawn as if they are three- or four-year-olds, compared to the girl’s seven or eight. The closet monster clutches a teddy bear, the under-bed monster sucks his finger, and they all cling to the girl in their journey through the house.

My favorite illustrations were the four dual-page vertical spreads. Good choice, Udovic and/or layout guys. I could spend all day studying the little details in each picture. (Follow the progress of the under-bed-monster’s roller skates as he traverses the house, for instance.)

One last thing: I’m not entirely sure why the little girl seems to have blue-streaked hair. It’s a bit of minor weirdness that caught my eye in this otherwise delightful picture book.

Great for readalouds (I tried it out on a preschool, who loved it), kids dealing with monster fears, and kids after a safe shivery time.
Posted by Bibliovore at 10:38 AM