Book Review: Sucks to Be Me by Kimberly Pauley 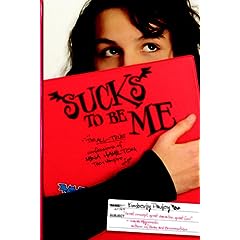 Book: Sucks to Be Me

Most kids feel like their parents have superpowers--knowledge of when trouble is a’brewin’, perhaps, or supersonic hearing for that nasty name you just called your little brother. In Mina Hamilton’s case, it’s true. Her parents have super-hearing, don’t need to sleep, and always look good--just a few of the side effects of being vampires.

It’s something Mina’s always known but never given much thought to, until the day they sit her down and tell her that the Vampire Council says she has a month to make up her mind. Is she going to live out her life as a vampire, or a human? No pressure or anything.

Mina’s on the fence, and the vampire candidate classes she has to go to twice a week aren’t so much helping. If she chooses vampirism, she has to leave behind the human world, including her best friend. But if she stays human, she’ll not only lose her parents, she’ll lose all memory of them.

What’s a possible teen vampire to do?

With little notes on vampire myths and truths at the head of each chapter (my favorite was MYTH: Vampires have no reflection. TRUTH: That’s silly. How would you check your makeup?) and cute sketches of smiling bats and vampy faces, Pauley sets a cheerful, Princess Diaries tone that keeps this book bouncing along. While darker undercurrents in vampire society are alluded to, she wisely concentrates on the fun. Mina’s not battling evil here, just questions about how much to tell her best friend and what to do about the three (count ‘em) guys in her life, two of whom are in on the vamp secret.

I really liked that her parents weren’t pressuring her one way or the other--in fact, they’re determined not to influence her decision. Together with her Uncle Mortie, they form a loving family unit, the basis of Pauley’s tongue-in-cheek approach to vampirism, and an antidote to the brooding vamps of myth and legend. No cut-glass cheekbones, black capes, or widow’s peaks in this crowd--Uncle Mortie is a balding door-to-door salesman and Dad is an accountant with a fondness for Italian food, the more garlic the better.

To me, Mina reads a little younger than a senior in high school, but that’s okay, because (except for one euw-inducing vampire-sex talk from Mom) this book is clean enough to give out to middle-schoolers. While this novel is complete in itself, I would read a sequel, just to see how Mina’s life changes after her decision (no spoilers!).

Light-hearted and sweet-natured, this book is a sure hit with those kids that prefer laughs over angst with their blood-suckers.
Posted by Bibliovore at 9:19 PM

Definitely into "laughs-over-angst" in general! I'll be sure to check this book out!

I will have to read this book, with my niece Serena.

I did a little blog about the conference. Check it out at www.kimkasch.blogspot.com.