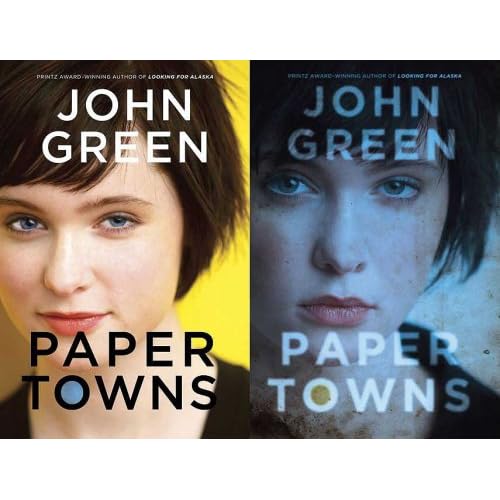 As a kid, Quentin Jacobsen was infatuated with his best friend, the fascinating Margo Roth Speigelman. Now seniors in high school, they’ve drifted into different social strata and he’s still infatuated. So much so that when she appears at his window late one school night on a mission for revenge and in need of a driver for same, he ditches responsibility and fires up the minivan. Through a night of clothing theft, eyebrow removal, and dead fish, Quentin believes that he’s reconnected with the Margo he once knew, and everything will be different now.

But the next day at school, she’s nowhere to be found. As the Margo-less days pass, Quentin becomes convinced that she’s about to do something drastic. Furthermore, he’s the only one who can assemble the clues and save her from herself. But as his search takes him further into the life Margo left behind, he starts to wonder--did he ever really know her?

I’m always a little worried about reading books by people I know. Now I realize that watching somebody’s vlog is not the same as really getting to know them--it’s mostly a one-way street. Still, they feel like somebody you know, and you wonder if you can stop hearing their voice and hear the characters’ instead. Overall, Green succeeds with this book.

Green’s writing really shines in the character of Margo Roth Speigelman (try saying “Margo” without adding “Roth Speigelman” now. Just try it. They’re permanently linked.) She’s exactly as mysterious, intoxicating, and intriguing to us as to Quentin. Q himself is very much in the vein of Green’s other main character/narrators, young men standing warily on the line between childhood and adulthood and just getting an inkling of the confusing, painful, demanding, joyful mess they’re about to walk into.

Try Paper Towns for a book about the way we think about people, and how deceptive that image can be.
Posted by Bibliovore at 11:38 AM

I've read so much about this book... I have to pick it up! It sounds fascinating.

I just bought Paper Towns yesterday! John and Hank are coming to Seattle at the end of the month, too.

Enjoy, Farida! They're coming to LA too; I just have to figure out how I'm going to get down there.