Book Review: Anything You Want by Geoff Herbach 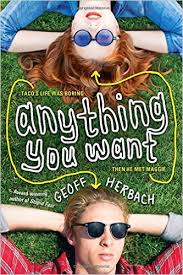 Summary: Taco Keller thinks he's doing okay. Sure, his mom died last year and his dad is never around and his brother has a short temper and drinks too much. But Taco just knows every day is the best day of his life!

When his beloved girlfriend, Maggie, gets pregnant (they didn't use birth control because it was for recreational purposes), he greets this life-changing news with his customary optimism. He can do this! He'll get a job (maybe two) and he'll get excellent grades and also a role in the school play and he'll just be the best husband and father ever. It doesn't matter that Maggie is blowing hot and cold constantly, and that nobody thinks he can actually do this, and everyone is encouraging him and Maggie to give the baby up for adoption.

After all, every day is the best day of his life.

First Impressions: This kid was as dumb as a box of hair. At least he knew it, unlike everyone else.

Later On: One of the reasons I keep reading Geoff Herbach's books is for how real his teen male protagonists feel. (He doesn't do as well with his female characters - they all tend to default to Nice Lady or Crazy Lady in this one.) But there's a lot going on with Taco in particular.

His unflagging optimism both papers over and attempts to compensate for some real pain and uncertainty. The power of this novel is how he gradually comes to realize that he's really, really not ready to be a father, that Maggie's not ready to be a mother, and that he's not abandoning his child (as he feels himself abandoned) by allowing it to be put up for adoption, but instead giving the baby the best chance at life.

While I realize this is Taco's story, I truly wish that the narrative had gotten more into Maggie's head. She was presented as a mystical, confusing creature who makes whimsical decisions and changes her mind the next day. I could see her uncertainty and confusion and could guess at the pressures on her, but it's all filtered through Taco's perception of her. There also seemed to be very little closure with her at the end.

For its flaws with female characters, this is still a wrenching, funny, honest, emotional book. When I wasn't laughing, I was crying.

More: Ms Yingling Reads
Posted by Bibliovore at 11:28 AM

Labels: Anything You Want, book review, Geoff Herbach, YA