One day, Bear finds the greatest thing ever, something his friend Mouse will love. He finds a box.

But as he takes it around, showing it to the other animals on his way, none of them agree. It’s just a box, nothing special, and besides, he isn’t even holding it right. Poor Bear! He thinks it’s wonderful, but nobody else does. What will his friend Mouse think?

Okay, apparently I am a late convert to this title. I’ve had the sequel (Don’t Worry Bear) in my Blue Journal for a few weeks now, but I just got Thank You Bear today.

The spare art style and gentle story have put this on my list of All-Time Fave Storytime Books (along with Antoinette Portis’s Not a Box). I also love that Bear immediately thinks of giving the box to his friend, reflecting the sporadic (and seemingly illogical) generosity of young children. Any kid who has ever had their latest treasure disparaged by others will feel vindicated by the end of this book. Try it as a read-aloud or a read-together, because you'll want to cuddle by the end of it.
Posted by Bibliovore at 8:43 PM No comments:

Are You Ready to Read?

If you aren't now, you'd better be by the first weekend in June! MotherReader has set her Third Annual 48-hour Book Challenge for that weekend. The challenge: to read, and blog, for 48 straight hours somewhere between Friday and Monday. Click the link for more details.
Posted by Bibliovore at 10:10 AM No comments:

A couple of years ago, I attended a children's lit conference at the University of Arizona. The theme was a sense of place in children's and YA lit. Ever since then, I've had an eye out for those kinds of books, and I look at the way location affects the story and the characters. My conclusion is, I like it--when it's done right.

Liz Gallagher's recent The Opposite of Invisible is one of those. It takes place in Seattle, and not just in a faceless suburb, but Seattle itself, with the Fremont Troll playing host to a couple of important scenes and other parts of the city holding equal importance.

New York City is a popular one, with a number of books taking place there. Aimee Friedman's The Year My Sister Got Lucky and Meg Cabot's Princess Diaries series are two recent examples.

I liked Laura Resau's Red Glass because it took place partially in Tucson, and was obviously written by someone who'd been there and wasn't just using it as shorthand for "dusty desert town." 4th Avenue, chickens in the backyard (this is legal in Tucson; I know because while I was studying at the university, I rented a room from a woman who did have a coop), the desert just outside the city limits, and immigration concerns all play a part.

I'm currently living just north of L.A., so when I read Gordon Korman's Son of the Mob: Hollywood Hustle and Jessica Blank's Almost Home, I noted how the city featured. In the first book, L.A. is semi-obligatory for a film student, and it provided a good foil for the New-York-grown main character and his family, but it felt a little like L.A. by the numbers. Beaches, check. Complaints about traffic, check. Glittery people, check.

In the second, Blank shows a seamy underbelly of LA that's rarely mentioned in the guidebooks. In fact, the whole book takes place in about a six-block square area--quite a feat for a city that's got the worst case of urban sprawl known to motorists.

Did the choice work for both books? I think so. Hollywood Hustle used L.A. a symbol and a foil, a new world for Vince. Almost Home turned the traditional view of L.A. on its head to make the situation of the characters all that much more horrible.

How about you? What are some recent books with a strong sense of place? Was it done right?
Posted by Bibliovore at 4:02 PM 1 comment:

Can you guys tell I'm catching up on my Bloglines?

Check out this interview/review of Sarah Brannen's same-sex guinea-pig marriage tale, Uncle Bobby's Wedding, over at AfterElton.com. I haven't read this book yet, but I'm excited for it. Cuz, guinea pigs! Also, indications are that (as in Pija Lindenbaum's Mini Mia and Her Darling Uncle), the title character's sexuality is not the focus of drama and angst.

Unlike many older LGBT-themed children’s books, such as Heather Has Two Mommies, [the book] doesn’t focus on a child struggling against negative views of her family. . . . This leaves Brannen free to concentrate on her other themes, and opens up the book to a wider audience.

Plus, look at that gorgeous spread of a garden wedding about halfway down the first page (with, again, guinea pigs!)

Thanks to KT Horning over at Worth the Trip for the link.
Posted by Bibliovore at 12:57 PM No comments:

I've managed to stop rolling on the floor long enough to post this link from the Onion: Stop Making Movies About My Books! by Dr. Seuss

The writer even manages a fair approximation of Seuss's style, although it's not something I'd read to the kiddies. But anyone who's seen "The Grinch Who Stole Christmas" (that one with Jim Carrey, urgh!) will agree.

Thanks to Leila at Bookshelves of Doom for the link.
Posted by Bibliovore at 12:07 PM No comments:

Hey everyone, it's International Children's Book Day! So go read a book to an international child!

Seriously, it's a day put on by the International Board on Books for Young People (IBBY) that coincides with Hans Christian Andersen's birthday. This year's theme is "Books Enlighten: Knowledge Delights" and the featured artist is a guy from Thailand whose name I have no hope of pronouncing (Chakrabhand Posayakrit), but I lovelovelove that poster.

Check out some of the messages from previous years too. Margaret Mahy was 2007.

Thanks to Little Willow over at Bildungsroman for the link.
Posted by Bibliovore at 11:43 AM No comments: 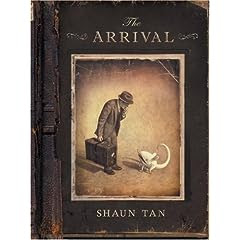 by S.E. Hinton and Thirteen Reasons Why

by Steve Jenkins
Preschool: Millie Waits for the Mail by Alexander Steffensmeier

Because I Want To Awards
Yes It Really is That Good: The Arrival

by Scott Westerfeld
Kinda Glad I Didn't Know What It Was About When I Picked It Up Cuz Otherwise I Wouldn't Have: Almost Home

by Jessica Blank
Damn You, Author, It Made Me Sob: Laika

by Grace Lin
Posted by Bibliovore at 11:25 PM No comments: