Book Review: Gabby Duran and the Unsittables by Elise Allen and Daryle Conners 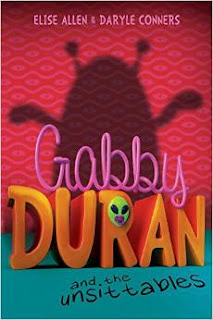 Gabby Duran has a reputation as the babysitter who can handle even the toughest cases with ease, and has a thriving babysitting empire. She's well used to things like being flown to Florida for the day to babysit a movie star's rambunctious triplets. However, she's thrown for a bit of a loop when she gets tagged to babysit little extraterrestrials by Edwina, the humorless head of A.L.I.E.N. (Association Linking Intergalatics and Earthlings as Neighbors). Seems that little extraterrestrials scare away most human babysitters.

But no matter where they come from, children are children, and Gabby lives up to her reputation. Her second alien charge, a tiny shapeshifter named Wutt, seems easy enough, even if she does have to cart her around school all day long. But then Edwina lets her know that another mysterious organization called G.E.T. O.U.T. is out to eradicate all alien visitors from the planet, and they have their sights set on Wutt. Who just happens to be a member of the royal family on her planet of origin, a planet that has a history of striking first and asking questions later.

No pressure or anything.

I had to read this with two sets of viewpoints. As an adult, I was appalled at how little infrmation Gabby got about dangerous situations and how willing Edwina, her A.L.I.E.N. contact, was to let her handle all these things herself with stakes like the future of planet Earth. I also thought Gabby was almost prenaturally good-natured and self-sacrificing for a twelve-year-old, but it's nice to read a middle school book with a minimum of whining. As a reader with an eye to what kids would like, I have to admit that Gabby being left almost completely on her own added to the appeal and the adventure of this story. I think kids will enjoy the breakneck pace, the goofy action, and the familiar, everyday events given a silly sci-fi twist.
Posted by Bibliovore at 10:09 PM No comments:

Book Review: The Doublecross (and other skills I learned as a superspy) by Jackson Pearce

Book: The Doublecross (and other skills I learned as a superspy)
Author: Jackson Pearce
Published: July 14, 2015
Source: review copy from publisher via Netgalley.com

Hale's parents are two of SRS's best spies. The Jordans are known worldwide. Too bad for them that he's a chubby, awkward kid who couldn't win a footrace against a herd of snails - hardly the kind of son to live up to superspy parents. Still, when they disappear on a mission, Hale knows he can break into the evil League's headquarters and rescue them, because he's got plenty of brains and wits, and really, what's more important to a spy?

But the League isn't the evil super-organization he's always been told it was. It's a rickety affair, drained of its funding, limping along with only one spy and some hapless support staff. And what they tell Hale turns his whole world upside down - because it turns out SRS are the ones who made his parents disappear. SRS are the bad guys.

Just like with his initial plan to rescue his parents, Hale knows the right thing to do, and that's to bring down the SRS from inside.

This is a book you probably shouldn't think about too closely, what with its prepubescent spies and I-Spy antics. It's awfully fun once you have a generous suspension of disbelief. The plot romps along, with plenty of explosions and gadgets and excitement, as well as humor. I also enjoyed Hale's confidence in his own abilities. Yes, he's overweight and not that great at the physical stuff. (Pearce mostly avoids making fat-shaming a source of comedy, luckily.) Hale is also observant, nimble-witted, and is able to oversee a mission with a variety of challenges.

What really appealed to me the most was the generous dose of heart in Hale's friendships with new League pals Ben and Beatrix, as well with his baby sister Kennedy, and his one-time friend/one-time nemesis/now maybe friend again, Walter Quaddlebaum.

The end is open to a series of Hale's adventures fighting the SRS, and that's a series that would probably be popular among middle-schoolers.
Posted by Bibliovore at 7:14 PM No comments:

Book Review: Hold Me Like a Breath by Tiffany Schmidt

Penelope Landlow is a Mafia princess, the daughter of one of the most successful organ traffickers in the country. But she's shielded from the business because of her illness, an autoimmune disorder that means she bruises at the barest touch. Wrapped up in cotton wool and sheltered from the world, she chafes at her restrictions and dreams of escaping to New York City and being allowed to love Garrett Ward, her brother Carter's bodyguard.

When Carter is murdered, apparently by the rival Zhu family, Penelope's world is rocked to its foundations. But when her parents are slaughtered, just as she's planning to run away with
Garrett, that world is shattered beyond hope of repair. Spirited away to New York City, without Garrett, she finds only loneliness in the city she's longed for.

Then she meets Char. Still in hiding, she gives him a fake name and discovers unexpected freedom in the role of Maeve. Maeve isn't sick. Maeve has never so much as heard of organized crime. Maeve is free to create her own life. But Penelope Landlow's dangerous life is waiting to suck her back in.

This book took a long time to get started. Schmidt spends a considerable number of pages on setting up Penelope's pampered, confining life and her longings for something more. I almost put it down, but things picked up around the 1/3rd mark and after that I was glued to the pages - especially once I figured out that the rather dull Garrett wasn't actually the love interest.

In fact, I was heartened to realize that while Penelope falls in love with somebody else, Char is a secondary character at best. This is Penelope's story, through and through - how she moves from being an overprotected, fearful, and naive girl to a young woman willing to take risks for herself and the people she loves.

My favorite part? Penelope doesn't get magically cured of her autoimmune disorder. Instead, she learns how to manage it, how to live with it instead of allowing it to define her. A harrowing sequence late in the novel leaves her black and blue from head to foot, quite literally, but you can tell it's all worth it.

Drawing on both The Princess and the Pea and Rapunzel, this is a fairy tale retelling with a hefty dose of suspense, betrayal, and inner strength. This is apparently the first in a series, and while I don't know where it will go from here, I'm willing to find out.
Posted by Bibliovore at 11:17 AM No comments:

Sold by his father for ale, mistreated by his new master, twelve-year-old Will Sparrow takes off, vowing to care only for himself. But the world of Elizabethan England isn't known for its kindness to the young and the vulnerable, and Will is taken advantage of time and again.

When he falls in with a most unusual group - a dwarf man, a cat-faced girl, their wagon full of oddities, and Tidball, the man who owns them all - Will thinks he's found a place to belong, at least for a little while. But how long can such a life last?

I love Karen Cushman's writing for the vivid way it brings history to life, but also for its complicated, realistic, and not always likeable main characters. Will is both hardened by life and tremendously naive, taking people at face value yet unsurprised when they betray him. Both of these qualities are things he has to unlearn in the course of the book. When he meets Fitz and Grace Wyse, he dismisses them as freaks and believes in his new master's promises of food and pay. But as Tidball breaks those promises over and over, and both Fitz and Grace prove to be more than the brawler and the monster Tidball calls them, he learns both to look beyond the surface and to trust that others will be there for him.

History is generally a hard sell for kids, and the first part of this book moves somewhat slowly. It picks up when he meets Tidball, but the changes in both Will and how he sees others still unfold at a gradual, if realistic pace.While it takes place four hundred years ago, Will's loneliness and his found family will strike a chord with kids willing to dive in.
Posted by Bibliovore at 9:42 PM 1 comment:

Standouts
Teen: Hold Me Like a Breath by Tiffany Schmidt
Riffing on both Rapunzel and the Princess and the Pea, this story about a frustrated, sheltered, and naive girl becoming a self-reliant young woman caught me hard. I just had to hang there through the slow start.
Tween: The Fourteenth Goldfish by Jennifer L. Holm
This story of a grandfather who's discovered the fountain of youth and a granddaughter who's discovering science, and the way they both learn to accept that life is about change, tugged at my heart with its humor and emotional honesty.
Children: Locomotive by Brian Floca
Do you know a history-and-trains-obsessed kid? They will eat this up.

Because I Want To Awards
Precious Cinnamon Roll: Sebastian in The Summer of Chasing Mermaids by Sarah Ockler
The younger brother of the love interest, Sebastian is also a little boy who adores mermaids, and gets enormous flack for this love from his father and the town, but never lets that daunt him from dressing up as the princess of the sea. Ockler places no labels on him, other than "loves mermaids," and it's a beautiful thing.
Brains Not Brawn: The Doublecross by Jackson Pearce
A lot of books overtly express that value, but this one really lays it down by showing how Hale's intelligence and ability to coordinate a team stands him in much better stead in spycraft than being able to run a mile.

Posted by Bibliovore at 9:53 PM No comments: