Book Review: To Catch a Cheat by Varian Johnson

Summary: After the shenanigans of The Great Greene Heist, Jackson is trying to keep his nose clean. Really! He is!  But he's framed for a cheating con, and the principal is all too eager to take the excuse to strike him down. Complicating matters are a fight with his best friend, and his attempts to kiss his sort-of girlfriend for the first time. (Yikes!) Still, Jackson's got to clear this up. What can a reformed con artist do, but con his way to the center of this mystery?

First Impressions: A fun romp, although I got lost more than a few times with all the characters. And I definitely spent some time wanting to knock Jackson and Charlie's heads together.

Later On: The things I liked (and the things I didn't) about the first one carried over into this book. I still loved the casual diversity (Jackson is black, Charlie and Gabi are Latinx, they have friends of other ethnicities as well) and the fine ear for the complexities of middle-school life. The con stuff got really, really involved, especially when the story juggled multiple characters of dubious intentions. Still, I think that this could become an entertaining MG series.

I was never entirely clear on why Charlie and Jackson were at odds, although I could see how it
played out. Charlie's been in Jackson's shadow a lot, and Jackson is just clever enough to be arrogant about it, and that arrogance would grate.

More: Kirkus
Book Nut
Posted by Bibliovore at 11:22 AM 1 comment:

Summary: When the popular girl is murdered, Nikki feels strangely drawn toward the case, even getting entangled with the girl's sexy older brother.

First Impressions: Meh. I know she's supposed to be Tough and Independent but she was awfully cagey with the cop for no reason. And the book treated synaesthesia like a superpower or something. Just weird and unsatisfying.

Later On: Generally I really like Jennifer Brown's stories. She focuses tightly on characters and character development, and how relationships grow and change, especially under the pressure of horrible situations.

This shift to a more plot-heavy mystery didn't work at all for me, especially since the things that were so strong in her other stories suffered for Plot Reasons. We never meet the murdered girl, but somehow Nikki felt a connection, even though her assessment of the murdered girl before she was murdered was decidedly negative. There was a romantic subplot and I know I was supposed to feel a connection to it and to the romantic lead (whose name I can't even remember), but I really didn't.

I know it's fashionable, especially in noir stories, to mistrust the police, but I couldn't figure out any earthly reason for her not to bring the cop in on her suspicions, even partially. He wasn't actively undermining her, gaslighting her, or at any time seemed to be one of the bad guys. In fact, he kept coming around to say, "Look, can I help? I'm doing this; this is my actual job and I'm really trying to do it here. I have information, do you have information?" And she would say no because . . . suspense?! It was unsatisfying.

Finally, my issue with the use of Nikki's synesthesia. Brown did acknowledge it as something that has given Nikki learning difficulties, but it also functioned as a magical signpost to Things That Were Important to the mystery, and a connection to the murdered girl, who (minor spoiler) had synesthesia herself.   But my understanding, which because I'm not a neuroscientist is not exactly thorough, is that synesthesia works differently for different people. How could the dead girl possibly have known what would jump out at Nikki and what wouldn't? Just a little too convenient.

I'll read Brown's next book, but only if it's not a noir mystery.

More: Kirkus Reviews
Disability in Kidlit on repackaging disabilities as superpowers, which is not always a bad thing, but annoyed me in this book
Posted by Bibliovore at 11:41 AM No comments:

I've had a busy few weeks at work, so I wasn't able to get any posts polished enough to go live. To make up for it(ish), I'm giving you a doubleheader today, where I review two books that are similar in some way and discuss what I think of those similarities and their differences.

Summary: Khalid marries a young woman every evening and in the morning he kills her. Nobody can stop him because, well, he's the king.

After her best friend becomes his latest victim, Shahrzad decides that she's going to take him on, find out why all the murders are happening, and then kill him. It's a good plan, but it goes a little off track when she starts to fall in love with him.

First Impressions: The story was compelling but OH MY GOD. The prose. PURPLE.

Later On: I struggled with this book. I know a lot of people who've been swept away by it, but my brain kept inconveniently breaking in. Like, Khalid? Um, why are you doing all this killing? Shahrzad, honey, why aren't you pointing out that this is super-not-okay? I get that you're falling in lurve and all but kiddies, love is about communication. You know what you're not communicating? THAT HIM KILLING ALL HIS PREVIOUS WIVES WAS NOT OKAY. He victimized his country, he terrorized families, he gave no reason, and OH YES A WHOLE BUNCH OF GIRLS ARE DEAD. I was genuinely questioning why he hadn't been the hell overthrown by now. A lot of the girls he picked were from powerful families - why didn't some of them send in an assassin and STOP THIS NONSENSE?

When a book makes me this WTF, I generally stop reading. This one, I kept reading because I actually did want to find out his reasons. Shahrzad is smart and spunky and loving and loyal, and she's gonna Queen like nobody's damn business, so I was initially in it for her. And then, aside from the whole lots and lots of dead wives thing (which would seem to be a dealbreaker), Khalid was an appealing and warm-hearted guy who seems to be genuinely falling for Shahrzad. We do actually get a reason for all the wife-killing and it's not that Khalid is a serial killer who just can't help himself. But it fell flat for me. I never felt the actual threat of it.

And, yeah. The prose. It seemed like every line had to remind us that Khalid had flashing hazel eyes or that Shahrzad had the shiniest most beautimous hair in the palace, or something.

I know a lot of people loved it, but this one really wasn't for me.

Summary: In this retelling of 1001 nights, the main character sacrifices herself to save her sister and marries a king who's murdered all his previous wives.

First Impressions: This was what I wanted The Wrath and the Dawn to be. The focus on women and the work/powers/community/ties of women was beautiful.

Later On: I still get a warm glow when I think of this book - of how important the relationships between women are. Sisters, mothers, aunts, female friends. There's a lovely little bit where the protagonist, who goes unnamed throughout the book, contemplates how her father's first wife, who is also her aunt, always functioned as another mother to her; a relationship that's not often portrayed this way.

This carries through to the palace. She begins to find out the history of the king's murders through talking to his mother and the palace craftswomen, gradually and patiently assembling the pieces into a whole that will let her save the country. Primarily, this is a story of a woman, backed by women, quietly, determinedly putting things right for a country that has gone terribly wrong.

Is it a swoony romance? No. The king is a man possessed by a demon, and there's no falling in love with this demon. At the end of the book, there's a hint that the man within might have started to catch feelings, but the love story here is the protagonist's love for her family, her community, and her country. 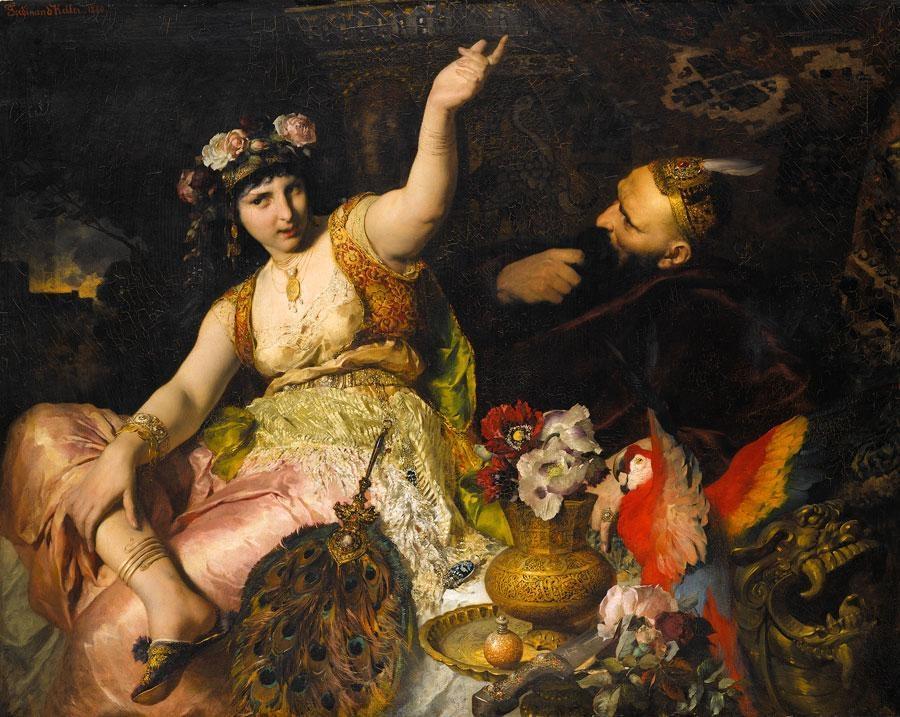 Scheherazade and Shahryār by Ferdinand Keller, 1880, taken from Wikipedia

So now for the compare and contrast portion of our show.

It's always interesting to see how two authors take the same base story and make such different things out of it. Where the first book focused tightly on the developing romance between the king and his queen (with touches of a love triangle and another couple's love story as subplots), the second focused on the larger implications of the king's destructive rampage and how it can be repaired. Maybe I'm Old and Fuddy, but that spoke to me more than the intimate romance. Anytime you get royal characters, I'm almost always more interested in the pressure of the fate of an entire nation resting on their choices and actions.

So my reviews, and the reviews linked here, are basically about how these books worked for generally white or white-presenting American ladies. There's a trickier question: how do they work as representations or interpretations of a piece of classic non-Western literature?

In the original story (Britannica.com), the king is killing women because his first wife cheated on him. Obviously, this doesn't play all that well as a trait of a romantic hero. While the books took different tacks, both wisely altered the king's motivation.

I tried hard to find writing about these books from Middle Eastern reviewers, but was unsuccessful. The 1001 Nights is basically the story that we know from Middle Eastern mythology. It is a framing device for retelling many other stories, but only Scheherezade and Aladdin (which was one of the stories told in the 1001 Nights) have entered Western canon to the point where we know the stories off the top of our heads.

From my extremely limited perspective, I would say that both novels used the Middle Eastern setting as an exotic locale or a fantasy land. This isn't that different from a lot of historical novels or historical fantasy. Did they respect the cultures? That's a trickier one because there's a few things at work here. I'm not of the culture. I'm not even very familiar with the culture. And the Middle East is a huge area, made up of many, many individual countries and subcultures, each with their own history. The effect of the Middle-Easternish fantasy land is to back away from that complexity while still retaining the otherness of the setting as a whole.

But some of the major Western stereotypes of the Middle East as a whole were avoided. Although polygamous marriage was an element in A Thousand Nights, in both books, women were largely respected by their male friends, husbands, fathers, and brothers. War and violence is something else Westerners associate with the Middle East, but in these stories, there was purpose to them.

Like I said, I'm not the person to really examine this. If you have background and opinions that are better informed than mine, please let me know so I can add some links.

Renee Ahdieh, author of The Wrath and the Dawn, briefly discusses the process of worldbuilding a Middle-Eastern infleunced fantasy world
Posted by Bibliovore at 11:16 AM 1 comment: