Using Our Powers for Good

Sheila over at Wands and Worlds has posted a call to authors and illustrators to donate to a charity auction in memory of a young Arkansas girl killed in a February tornado.

She's gotten Erin Hunter, of the Warriors series, involved. The funds raised will benefit a number of different causes, including literacy.

The whole story is pretty long, so I'll direct you to the post.

Spread the word!
Posted by Bibliovore at 11:00 AM 1 comment:

Labels: links, pass it on

Let Me Go On Record with a Gigantic "YES!!"

At Comic-Con this weekend, Perry Moore (author of Hero), and Stan Lee (oh, please, you know who Stan Lee is) have announced a partnership.

Honestly, people, I would be more excited if I could figure out what this partnership is supposed to entail. It's all very vague.

But the thing that really makes me happy? The article mentions that Hero is the first in a series.

Happy dance activate!
Posted by Bibliovore at 10:50 AM 2 comments:

From NASA's Astronomy Picture of the Day.
Posted by Bibliovore at 7:31 AM 2 comments:

I have for you today a couple of neat posts from Guys Lit Wire.

The first one is about the private identity crisis of children's and YA librarians, also known as "Do the awards we spend most of the year arguing about actually matter to the kids?"

As a former child, I feel qualified to comment. I rarely noticed whether a book had an award or not, especially when it was something like the Tri-County Stan Handford Award for Achievement in Excellence. They serve mostly as a tip-off to grownups that this is likely be a quality book, but even that comes with caveats. Some of the older Newberys have not aged well.

This is not to say that awards are crap. Recognition is good, and we shouldn't discount the grown-ups' need for a little help in picking books for their kids. Some of my old favorites were winners (The Blue Sword, for instance, may actually be buried with me. Ditto A Wrinkle in Time.) But that has more to do with the content of the stories and my own personal tastes than the fact that they were award winners. I have never gotten a child saying to me, "I want an award-winning book." They usually say something like, "I want a good book." Their definition of a good book (much like an award committee's) is subject to all sorts of personal quirks and preferences.

Okay, from one extreme to the other. The second post concerned that most historically reviled genre of kid's lit, comic books. It's only been in the past decade or so that libraries have begun to add graphic novels to their collections, and even so, it's done in a sort of appease-the-masses spirit. If they come in for Spider-Man, they may trip over Dosteyevsky on the way out, and then we have them MUAHAHAHAHA . . . ahem.

But Kristopher talks about what reading comics taught him about literature. He points out that comics readers rarely close the book without an opinion, or the desire to share that opinion with his or her fellow readers.

They’ll dissect plot arcs, character developments, and the internal logic of a comic, changes in costume and changes in tone, all the basic building blocks of a narrative. They will cite back issues as precedent.

You guys, I had that experience. It was called Literary Theory 101. And I have to tell you, it takes some wicked quality writing to support that kind of analysis.

So what do these two posts mean? Comic books good, award winners bad? Up is down? Bad is good? Black is white?

No. Black is still black, and white is still white. But literature, and people, exist in shades of grey. I am not arguing that books (and comic books) have no intrinsic value. They sure do. There's some real crap out there, people.

But the other half of the equation is the reader. And that, of course, is why we're all here.
Posted by Bibliovore at 3:19 PM No comments: 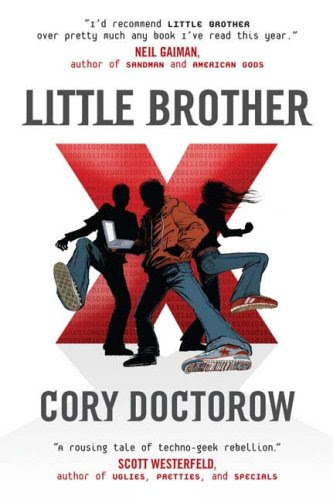 Simply for being in the wrong place at the wrong time, Marcus Yallow and his friends have been rounded up, imprisoned, and ruthlessly interrogated. Are they in Singapore? The Middle East?

No. They’re in the United States of America.

Caught in the aftermath of a terrorist attack, Marcus survives five days of "detainment" before he's let go. But the world he walks back into is more of a fascist state than a democratic nation. Everyone is monitored, everywhere, with the police pulling anyone with a slightly abnormal behavioral pattern in for questioning. Worse, civilians have given up personal freedoms willingly, in order to feel more safe.

Not Marcus. Within a day, he’s hacking an Xbox and setting up an underground Internet called the Xnet, spurring others to action in the name of retaking the freedoms they’ve lost to the War on Terror. But as the movement he’s created slips out of his control, he must constantly reevaluate his self-imposed mission. Where is the line between patriotism and terrorism? And who exactly is crossing it?

This is one of those books that you hear about all over place for months before it actually hits shelves. The back cover is crowded with blurbs from people who know what they’re talking about, all praising it to high heaven. Lucky for us, Doctorow really is that good. He even makes his periodic mini-lectures on hacking, computer tech, and civil disobedience history interesting.

Marcus is the kind of kid I’d be way intimidated by if I were in high school with him, both brilliant and independent. But taking the ride with him showed me the vulnerabilities as well as the strengths--the loss of friends, the betrayals of trust both public and personal, the fear, the self-doubt, the almost impossible uphill battle against the monolith, and finally, the inner core of love for his country that enables him to fight on.

This book should be required reading for every high school civics class, preferably in October or so. It’s a fast-paced, ferocious, terribly human tale about the rights, and more importantly, the responsibilities, of being an American.
Posted by Bibliovore at 10:44 PM 2 comments:

I was just reminded about Dr. Horrible's Sing-Along Blog, and now I'm passing that on to you. What does this have to do with children's and YA lit?

Uh, well, it's helmed by Joss Whedon, whose iconic Buffy the Vampire Slayer was all about the experience of being a teenager and growing up . . . and, um, it's on the internet, and these kids today, they like this internet thing . . . and uh, it's a subversive pastiche of comic book paradigms and . . . and . . .

Oh, the heck with it. I don't even know what "pastiche" means (or "paradigms" for that matter). You guys, it's a supervillain musical written by Joss Whedon.

Let's go over that again.

You can go now. But quick, because it's only up until July 20th. Me, I'm gonna go sing "Brand New Day" for sixteenth time.
Posted by Bibliovore at 10:35 PM 1 comment:

Sarah over at the Reading Zone has published a scathing rant about schools, summer reading lists, and the fact that they haven't changed in decades. (The schools or the lists.)

Amen! I love Maniac Magee, but for God's sake, school, it's been on your list for the past ten years. Switch it out! Get a little crazy! Do a little dance!

And pack away the tissues. It's summer. Not every book has to deal with Deep Themes like Death and War and the unbearable woe of existence. You'd be surprised how many humorous novels also have Deep Themes.

To all this, I'd like to add, "Schools, when you put at the bottom of the paper, 'Check the public library for these titles,' how about a leeetle heads-up to that self-same public library? Just a teeny one?" I'm reduced to snatching the lists from bewildered seventh-graders' hands, dashing away to make a quick copy, and giving my library supplier a call begging them to rush me several copies of each title, because my itty-bitty library is responsible for basically an entire school district.

Thanks to a number of bloggers for the link.
Posted by Bibliovore at 8:23 PM 4 comments:

Because God Knows There's Nothing to Watch on TV

Seriously, you guys, this made me want to become an astronaut.

There are various discussions on book trailers on various lists. Do they work, don't they, what are the components of a good book trailer, are they even worth the time. I like this one, although not having read Kitty, Kitty yet (sob!) I can't say yet whether it has much to do with the book in question.

ETA: because I'm a dork and didn't notice that the HTML for the videos was strangely truncated.
Posted by Bibliovore at 9:04 PM No comments:

I often forget what the book is about, so when it finally makes the top spot, I sometimes look at it and go, "Why did I want to read this?"

Sometimes the answer is in the author. (Well, duh, it's Sharon Creech. Of course I wanted to read it.) Or the title. (Zombie Blondes? Shoot, I rushed to put that in the blue journal so fast I think I pulled something.) But most of the time, I took a recommendation from some webpage, blogger, or even library patron--I forget who--and I'm sticking my hand in the grab bag by putting the request in the library system.

I flip through my blue journal and ponder the pages upon pages of titles and authors. Sometimes there's a publication date, but no more information than this. Is this book a picture book? An affecting tale of parental alcoholism? A book in verse? A madcap adventure? I'll never know until the request comes through and the book lands in my hot little hands.

From that point, they have the same chance as every other book--novels get fifty pages to grab me (or 25, if they're short), and picture books are flipped through on the reference desk.

The result is that I have a ridiculously sprawling sampling of books in both my blue Journal and my LibraryThing account (the latter status reserved for those books that survived the fifty page rule). I'm glad I'm a librarian, because there are only a few professions that reward such broad literary experience.
Posted by Bibliovore at 4:55 PM No comments:

This seems to have been the month of reading series and sequels right in a row. This was also the month of MotherReader's 48-hour Book Challenge. Finally, this was the month that I started the Summer Reading Program at work. Yikes. It's been a busy month.

by Caroline Hickey
Children: We Are the Ship

Because I Want To Awards
How Did I Miss This When I Was a Kid?: The Boy/Girl Battle Series

by Holly Black
Prompted the Happy Dance in the Middle of ALA: Moxy Maxwell Does Not Love Writing Thank-You Notes

and Janes In Love

by Cecil Castelluci (explanation: I got the ARC of the second at BEA just as the first book came up for reading on my TBR list. This was about a one-in-a-million chance, given my Byzantine methods of working through my TBR list.)
Swept Me Away: Wildwood Dancing by Juliet Marillier
Totally Lived Up to My Internal Hype: Book of a Thousand Days

by Shannon Hale
Posted by Bibliovore at 10:05 PM No comments: