First Impressions: Rebel of the Sands by Alwyn Hamilton

Summary: Amani needs to get out of her tiny, dead-end town before she becomes her uncle-in-law's next wife. She thinks a shooting contest is her ticket out, but after a series of catastrophes, she ends up running away with a mysterious stranger named Jin. They set off across the desert, headed for the city, but get sidelined along the way and find themselves in the camp of the rebel prince, where revelations about both Jin and Amani await.

First Impressions: Hmmm. Well I really liked the middle east/wild west mashup of the setting, but the character development and love story were both unconvincing.
Posted by Bibliovore at 8:01 PM No comments:

Labels: Alwyn Hamilton, first impressions, Rebel of the Sands, YA

Summary: To put it bluntly, Dylan is a beast. He's too tall, too hairy, too ugly for anybody to love. When he breaks both his legs in a freak accident and his mother starts to get worried that he's suicidal, he finds himself in a teen therapy group. It's there that he meets Jamie - beautiful, intelligent, intoxicating Jamie. And wonder of wonders, she seems to find him just as dazzling as he finds her, even as monstrous as he is.

But Dylan wasn't paying attention on the first day of therapy, when Jamie came out as trans to the group. When he learns this fact, and she learns that he was never as open and accepting as she thought he was, will their fledgling relationship survive?

First Impressions: I enjoyed this a lot but I really felt like she took him back way too fast after their arguments, and I wanted him to examine his transphobic attitudes more deeply.

Later On: While I was reading this, I mostly loved it. Jamie felt realistic, as did Dylan, and I really liked that they got a happy ending together, which is not as common as it should be in books with trans characters.

But my discomfort about Dylan's attitude built as we got nearer to the end and he showed no signs of truly examining where he was coming from in his attitude toward trangender people and how disrespectful it was of Jamie. There are a lot of transphobic "dude in a skirt" type comments, and his mother displays the same attitudes.

Admittedly, a lot of people are unthinkingly transphobic, especially if they've never met a trans person and never been asked to consider the harm that these attitudes inflict. It's not great, but showing a character examining, regretting, and changing their
behavior, as well as making reparations for the harm they've caused, can be a powerful story.

My problem was that Dylan never examined or reframed his attitudes, they just quietly faded away into a happy ending. For all of Dylan's angst about how people saw only the surface of his less-than-cover-model looks, he never quite figured out that it is just as hurtful to reduce Jamie to the genitalia she was born with.

More: Kirkus
Stuff You Missed in History Class - this is one of Dylan's favorite podcasts and gets mentioned here and there in connection with his ambition to become a history professor. I was thrilled because this has been on my listening list for years. If only he'd taken a listen to some of the transgender-focused episodes of their sister podcast, Stuff Mom Never Told You.
Posted by Bibliovore at 8:07 PM No comments:

Summary: Trapped underground by magic for ten years after the town turned on her family, Clementine finds herself set free when a boy named Fisher stumbles on her prison. Now she has to reconnect with the remaining family and friends she remembers, and more than that, she's going to find out what happened on that night ten years ago.

First Impressions: Wow, the atmosphere in this! I don't think it would stand up to a lot of close scrutiny plot-wise, but Clementine is very tough and really knows herself for a girl trapped underground for 10 years.
Posted by Bibliovore at 7:54 PM No comments:

Summary: Deaf* since a childhood bout with meningitis, Cece tries to navigate friendships, school, and her own identity, all of which are complicated by her large and cumbersome hearing aids.

First Impressions: This was a nice graphic memoir, much more slice of life than plot-based. Interesting to see the older technology (late 70s-early 80s), and I like the way she visualized her sonic experience of the world, with blank speech bubbles and fading words.

*This is the term the author uses in biographical materials.
Posted by Bibliovore at 9:59 PM No comments:

First Impression: The Weight of Zero by Karen Fortunati

Summary: Cath knows in her heart that she won't survive another brush with Zero, which is what she calls the depressive episodes of her bipolar disorder. With that in mind, she creates a bucket list for herself, including having sex. But to accomplish that, she needs someone to have sex with. Enter Michael. She thinks he'll be perfect for the job - nice, sweet, forgettable. Certainly nobody she'll ever fall in love with or be sad to leave behind when she dies. Or maybe he is?

First Impressions: For something with such a dramatic topic, this was a very quiet book, but I liked the slow, realistic progression of her path back to life.
Posted by Bibliovore at 10:42 PM No comments:

Labels: first impressions, Karen Fortunati, The Weight of Zero, YA 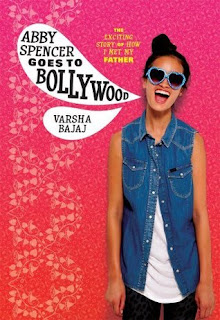 Title: Abby Spencer Goes to Bollywood
Author: Varsha Bajaj
Published: 2015
Source: Local Library
Summary: Abby has never known her father. Although her white mom and grandparents are awesome and amazing, the other side of her heritage - the Indian side - has always been a blank slate. But when she finally finds out who he is, it's something right out of a Bollywood drama. Maybe because her father is right out of a Bollywood drama - namely, one of the biggest stars in Bollywood. Whisked off to Mumbai for the summer, she learns about her father and herself, and starts to fill in some of that blank slate.
First Impressions: This was incredibly sweet, and actually kind of low-conflict. Much more of a tween book.
Posted by Bibliovore at 9:07 PM No comments:

The Cybils Are Out! 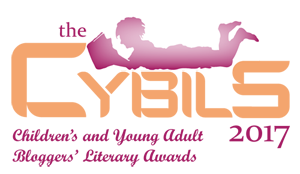 One of the things I flaked on doing in 2017 was volunteering for the Cybils. Blogging can be a lonely business, but the Cybils are one of those community events that reminds me that there are others just like me out there, who love kids' and teen books and love to talk about them and think about them.

But I didn't start this post just to talk about how  wonderful the Cybils are - even though they are wonderful, and the people who did volunteer are total superheroes.

What I really wanted to share was that they released their finalist shortlists on January 1! These are the books that made it through the first round (and let me tell you, that's a lot of nominated books) and will go on to be read, discussed, pulled apart, put back together again, and finally one will be chosen for each category and announced on February 14.

Share these lists with parents, teachers, librarians, and of course (always) with young and not-so-young readers.

Posted by Bibliovore at 9:16 PM No comments:

I don't know anybody for whom it was a particularly good year, overall. Good things happened, but the consensus seems to be, "2017, boy it's been a shitty one, hasn't it?"

For me, the whole middle chunk of the year was sort of grey and dreary and everything felt like swimming uphill. I let a lot of things go that used to make me happy and now just felt like a pointless effort. One of those was blogging. I kept reading, slowly, and I did have thoughts about what I read, but every time I even considered sitting down and writing them out in a longer format than a couple of sentences, I went, ". . . I'll do it later."

I don't know how well I'll do, picking this up again. I do actually have some posts that I managed to write out at some point, but never got around to putting up, because of all the effort involved. So I'll start with those, and see where I go.