First Impressions: The Inexplicable Logic of My Life by Benjamin Alire Saenz

Summary: Sal feels like a stranger to himself. He's punched two classmates (in fairness, one called him a pinche gringo, and the other called his father a homophobic slur), his friends' lives are coming apart at the seams, and he has no idea what to write for his college applications. Then he discovered his beloved grandmother is dying. As he makes his way through his senior year trying to work out what it all means, he'll have to come to terms with the messy, happy, sad, confusing, glorious business of living.

First Impressions: Awwwwwwwwwwww this made me cry. No plot but really about coming to terms with death and life and growing up.

More:  Latinos in Kidlit
By Singing Light
Posted by Bibliovore at 11:34 AM No comments:

Labels: Benjamin Alire Saenz, first impressions, The Inexplicable Logic of My Life, YA

Summary: Fabiola and her mother are almost out of Haiti for good. But her mother is detained at the airport in New York, and Fabiola has to go on alone to a new life on Detroit's west side with her aunt and cousins. America is very different from Haiti, but Fabiola draws strength from her ancestral vodoun religion, and capably takes the lessons from her first home into her second.

First Impressions: Arrrrrgh I want to clutch this book to my heart. Fabiola is so strong and struggling, and I love that neither Haiti nor Detroit are glorified nor demonized.

More: Waking Brain Cells
Rich in Color
Posted by Bibliovore at 11:27 AM No comments:

Book Review: By Your Side by Kasie West 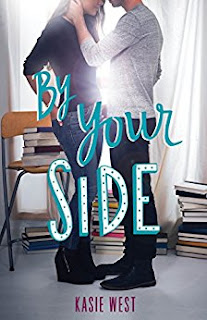 Title: By Your Side
Author: Kasie West
Published: 2017
Source: Edelweiss

Summary: Autumn was looking forward to the holiday weekend, hanging out with her friends at a snowy cabin in the woods, and maybe getting to actual girlfriend status with Jeff. But then the library closes early for the weekend, locking her and Dax Miller in together. No phones, no heat, and nobody's coming to rescue them. Dax is taciturn and mysterious, with a bad reputation, and he clearly isn't any happier with the situation than she is. Will they survive until the library re-opens?

First Impressions: This was very sweet! Not sure why the library didn't have phones but okay. I want to read more about the depiction of anxiety disorder.

Later On: The whole trapped-in-a-library thing required a lot of suspension of disbelief on my part, if only because I know full well how many phones any library has, and there was no mention of a power outage that would have knocked them out. But once I leaped that hurdle, I was able to enjoy the forced proximity of the locked-in trope, as they both let their guards down and learn to enjoy each other. Their newfound closeness chills once they return to the real world, with the pressures and expectations of other people affecting their behavior again.

A little about the portrayal of mental illness in this book: Autumn has anxiety and struggles with that during their involuntary lock-in. She ends up confiding in Dax - the only person she's ever told - and he is sweetly supportive, but she still keeps it a secret from her other friends, until a dramatic moment later in the book. I haven't seen anxiety in books a lot, at least as a named and treatable mental illness. Often what you get is a character portrayed as an uptight control freak. Autumn approaches it as an illness, not a personal flaw, but she's still self-conscious about it, which felt real. And most of all, it was an aspect of her character but not the defining characteristic.

Overall, this was a light, sweet romance with some more serious elements that didn't overwhelm the tone.

More: Disability in Kidlit
Posted by Bibliovore at 11:41 AM No comments:

Labels: book review, By Your Side, Kasie West, YA

First Impressions: The Beast is an Animal by Peternelle Van Arsdale

Summary: At seven, Alys first encountered the soul eaters, demonic twin spirits who - well, does what it says on the can. That didn't end well for her parents or any of the adults in her village. Alys and all the other children end up unwanted refugees in a neighboring village that uses them for free labor on the wall built to protect against the soul eaters. But as she grows, Alys chafes under mistreatment and feels a call to the forest, the soul eaters, and the Beast who controls them.

First Impressions: This was horror (why do I keep trying to read horror? whyyy?) but it ended well, and it was pretty grabby and readable. However, it also slid right out of my mind after reading, and my vague memory of the plot was that it never completely coalesced by the end.
Posted by Bibliovore at 11:22 AM No comments: