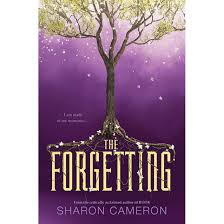 Summary: Every 7 years, a fog sweeps across Nadia's fortified town and erases everyone's memory. In order to pick their lives back up, the citizens of the town write everything down in books that they keep locked to their bodies. Anyone who goes missing during the Forgetting is presumed dead or lost.

Nadia has a secret. Unlike everyone else, she remembers what happened before the Forgetting. She remembers secrets, horrors, and even entire people that she was supposed to forget. She's kept her secret for years, but the Forgetting is coming again soon. Will she remember this time?

First Impressions: This was pretty enjoyable while I was in it, but when I closed it, I was like, "well that was a pretty cookie cutter dystopia."

Summary: In a city of monsters, August is one of the worst. Others eat blood or flesh, but he consumes souls, especially souls marred with sin. He hates himself, but it's how he survives, being a threat looming over the heads of his father's enemies. Kate Harker is the daughter of one of those enemies, and it's his job to keep tabs on her in her prestigious private school. But she's much more than he was prepared for - and the secrets both their families have been keeping are also much more.

First Impressions: This is pretty dark stuff, and I liked that the romance was low-key or maybe not even there at all. This was about the monstrous identities of both protagonists.

Summary: When she finds old friend Nicholas Sayre possessed with dark magic, Lirael - once a shy Assistant Librarian, now the Abhorsen-in-waiting - must journey back to her childhood home to find a way to save him. At the same time, a young woman from a distant land flees from enemies, carrying a mysterious message to Lirael. Will their paths cross in time for either of them?

First Impressions: So this felt like a prelude or something - it cut off in the middle before anything really happened. I was really frustrated, especially because the two groups didn't even meet by the end.
Posted by Bibliovore at 1:11 PM No comments:

Book Review: This is Where It Ends by Marieke Niejkamp

Book: This is Where It Ends
Author: Marieke Nijkamp
Published: 2016
Source: Local Library

Summary: On a chilly winter morning in Opportunity, Alabama, every student in the high school shuffles into the auditorium for yet another semester-opening assembly, complete with the same speech they've been hearing every year. It goes about like usual, until everyone gets up to leave, and finds every door locked. They're trapped.

And then the shooting begins.

First Impressions: This was so hard to read. I liked the multiplicity of views on the shooter from different viewpoints, and the mirroring of the sibling relationships.

Later On: Truthfully? I really didn't want to read this book, and I wouldn't have if I hadn't been judging it for the Cybils. Not because I thought it was going to be bad. I'd been hearing good things about it. But the topic was enough to make me go NOPE, so I went

I couldn't put it down, but at the same time, I didn't want to be reading it. Does that make sense? I hated what the characters were going through (and I guess that's an endorsement in its own way, that the characters were well-drawn enough around all the bloodshed that I cared about every one of the many, many kids we were introduced to), but at the same time, I wanted to be with them as they did.

My favorite part was the way it took a hard look at the shooter from various perspectives - as a brother, as a boyfriend, as a bully. The other thing I appreciated is that everyone in this book has their challenges and hardships, but still, Tyler is the only one who chose to pick up a gun. There were some glitches in logic, but I was able to overlook that. More seriously, there was a revelation toward the end that felt too late to really have the desired effect.

I don't regret reading it, but at the same time I can't really say that I'm glad I did. It was a harrowing experience, but if that's what you want from your reading, then go for it.

More: Kirkus
Posted by Bibliovore at 11:41 AM No comments:

Labels: book review, Marieke Nijkamp, This is Where It Ends, YA

Book Review: Vassa in the Night by Sarah Porter

Summary: The nights in Brooklyn are growing longer lately, and night is the scariest time to go to BY's convenience store, surrounded by the heads of shoplifters on pikes. Vassa has no choice, though, when one of her stepsisters insists that she needs lightbulbs right now, that it can't wait until the distant morning.

Armed only with her tiny living doll, Erg, a gift from her long-dead mother, she ventures forth. Almost immediately, Vassa gets captured by BY's horrifying proprietor, Babs Yagg, and her hideous severed-hand henchmen. Babs says she will let her go, but only if she can survive three nights working at the front counter as cashier. Three very, very long nights.

First Impressions: This was really neat and creepy. It got more horror-ish as time went on but never quite tipped over into that genre, I think.

Later On: When it comes to horror, I'm a wimp. I don't watch scary movies and in general, I stay away from the most hard-core thngs-that-go-bump-in-the-night novels. But I like books with a little bit of an edge, just a flash of teeth.

As I was explaining to a co-worker while trying to get her to read this book (a noble cause, I think you'll agree), it's not so much horror as it is tremendously dark fantasy. There are dismemberments and those creepy little hands and heads on pikes, and not everything is magically fixed at the end. What keeps it from being the darkest of horror, in my mind, was that Vassa has a lot of resources of her own. There's Erg, for one, and then there's Vassa herself, who is smart and resourceful and has a gentler heart then maybe she would like to admit.

There's also a sense of a bigger magical world outside the one that Vassa inhabits within BY's. In flashbacks, we get some of her backstory and that of her parents filled in. For all its gory threats, it's one I would be happy to return to.

More: Cuddlebuggery
Waking Brain Cells
Interview with the Author at Barnes & Noble.com
Posted by Bibliovore at 11:34 AM No comments: