First Impressions: Revenge of the Evil Librarian by Michelle Knudsen

Summary: Cynthia has survived the school year, which isn't as easy as it sounds, considering she had a run-in with a demon librarian who wanted to kidnap her best friend to the Underworld. (Oy. High school.) But she defeated him, and she's looking forward to a fun summer at theater camp with her hot boyfriend. Then she arrives at camp and finds demons there too, and not just metaphorical ones.

First Impressions: As snarky and fun as the first one, but with the same deeply (maybe too deeply?) buried dark notes. While it bounces cheerfully from mortal peril to mortal peril, the rockiness of her relationship with her boyfriend is glossed over, even when she's lying to his face. If you're looking for a breezy, snarky paranormal, read it but don't expect more.
Posted by Bibliovore at 12:37 PM No comments:

Summary: In the midst of the Revolutionary War, former slaves Isabel and Curzon are headed for Isabel's sister and freedom, in that order. When she finds Ruth, the adoring baby sister she remembers has been replaced by a cold, resentful stranger, one who doesn't want anything to do with her. And her tentative relationship with Curzon seems to be falling apart as well.

As the Revolutionary War draws to a close and the seeds of a new country begin to sprout, Isabel, Curzon, and Ruth all struggle to find their places in this place called the United States of America.

First Impressions: I really liked how this showed how alone she felt with neither the Patriots nor the Loyalists having her interests at heart. Also the story with Ruth was very sweet.

Later On: Isabel's story (and the American Revolutionary War) wrap up in the third book of this trilogy. Isabel is a fascinating main character. She is angry and prickly a lot of the time, with good reason, but it doesn't do anything to help her relationship with either Curzon or Ruth. Both have to be repaired carefully and slowly, but they get there in the end.

Anderson's story leaves Curzon, Ruth, and Isabel at the precipice of a new moment in history and in their lives. 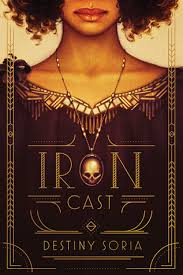 Summary: In an alternate 1919 Boston, where club owners trade in illegal blood magic and enchantments, Ada Navarra and her best friend Corinne Wells live by their wits, running cons and weaving illusions for the entertainment of the elite under the protection of Johnny Dervish. But things start to go south, and Johnny can't save them anymore. That's okay. They've got each other, and that's more than enough.

First Impressions: I enjoy a good alternate history, and I love how the friendship between the two girls (one of whom is biracial) is the most important relationship in the book by far. But the ending suffered from Lord of the Rings syndrome, which made it drag as every last little thread and character had to be wrapped up.
Posted by Bibliovore at 12:42 PM No comments:

Summary: Gabby is the sensible sister in the Rivera family, buckling down to her schoolwork and working conscientiously at her job. Daphne is the free spirit, throwing herself into her passions and crushes with abandon. Neither one understands her sister or her way of approaching the world. When multiple crises hit the Rivera family as a whole and both girls on a personal level, they'll each have to learn that a little of their sister's approach to life isn't necessarily a bad thing.

First Impressions: It was really, really hard to like either of these girls at times. Gabby could be nasty and judgemental, Daphne could be so utterly thoughtless that I wanted to reach into the book and shake her. But it also really captured the sister dynamic and evoked the novel that it was based on (Sense and Sensibility, in case you couldn't tell). I think the two love plots got a little shortchanged at the end though.
Posted by Bibliovore at 11:21 AM No comments:

Summary: Valor is the best shot in the whole kingdom. So when she fails to assassinate the crown prince, only she knows that she missed on purpose. She had to get caught, because that's the only way she's going to the horrific children's prison, Tyur'ma, which is already holding her twin sister. After all, just because nobody's ever escaped it before doesn't mean two sisters can't do it now.

First Impressions: Okay I liked the premise, and the escape plan, but the revelation of what was Actually Going On felt a little thin, and something about this horrific prison for kids (that everyone's just okay with) rubbed me the wrong way.
Posted by Bibliovore at 11:06 AM No comments: