The 48-HBC is Nigh! and a Sobering Realization 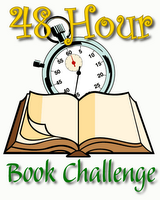 MotherReader just announced her annual 48-Hour Book Challenge, fondly known around the interwebs as the 48HBC. It's quite simple - you pick 48 consecutive hours somewhere in the weekend of June 6-8 and read for as many of those hours as you humanly can. You also blog what you've read, chat on Twitter, and visit each other's blogs.

This year, because it's always (unfortunately) a Topic of Concern amongst the kidliterati, the focus is on diversity. WeNeedDiverseBooks is a hashtag that's been going around the Twitters and the Tumblrs and I don't know what else these kids are using these days, get off my lawn.

By the way, it's 2014. Why is this still a thing? Why is it still so hard to find these books about kids that are other than white, straight, neurotypical, and able-bodied? Agh.

As I do every year, I went wading through my TBR list to see what I wanted to read. These things have to be ordered, you understand. There has to be planning. I generally read about 9 books during the 48-HBC challenge. To give myself choices, I decided to pick about 12 or so books out of my list. I also decided to be as broad as possible. Anything where the main character didn't fit that "default" setting stated above would qualify.

I went in going, "This should be easy. These are the kind of books that catch my eye." Several pages later, I was still scrolling, muttering, "Really? Out of all these books, it's taking me this long to find the ones I would call diverse?" I did finally pull together several books, but I was dismayed by how long it took.

In my defense, I just read two books that would qualify under my terms, Varian Johnson's The Great Greene Heist, whose incredibly multicultural cast started this leg of the ongoing diversity conversation, and Wendelin Van Draanen's The Running Dream, about a runner who has to adjust to life with a leg amputated below the knee. Also in my own defense, I was going off titles, authors, and a fuzzy memory of why I'd put certain books on my list. But still, I should have more choice. I should be putting more of these on my list, and I should have more available to put on my list in the first place.

If you know of a book I should read for the challenge, please leave it in the comments. Also, it should be the main character, not a supporting cast member. Yes, inclusivity in the characters surrounding the main character is nice and I like it. But nobody is a sidekick in their own life.

Standouts
Teen: We Were Liars by E. Lockhart
I can't even explain what this book is about without spoiling it. Argh. Just read it, would you?
Tween: The Swift Boys and Me by Kody Keplinger
One tumultuous summer changes all the things eleven-year-old Nola has always taken for granted. Some better, some worse, some just different. I've loved Keplinger's work for teens, and she displays the same deft touch with people and relationships in her first book for younger readers.
Children: The Ninja Librarians: The Accidental Keyhand by Jen Swann Downey
Secret-agent librarians who defend free speech through space and time! Special guest appearances by Hypatia, Casanova, and Cyrano de Bergerac! Also, sword-fighting and a mongoose on the loose. Overall, a rattling good adventure.

Because I Want To Awards
Most Interesting Format: In the Shadows by Kiersten White and Jim diBartolo
White wrote a text-only story, di Bartolo a pictures-only story. With the two stories running in parallel, it takes most of the book to work out how they're connected, but that kept me reading. The ending made me awwwwwww.
Is There a Sequel, Please?: Olivia Bean, Trivia Queen by Donna Gephert
There were a lot of things to like about this book (a realistic look at disillusionment and the reassembling of a family, as well as an almost-sort-of-nascent romance), but now I really want to read the story of Nikki, Olivia's ex-best friend.
Most Deeply Flawed Characters: Cruel Beauty by Rosamund Hodge
And I mean that in a good way. Everywhere you turn in this book, there are awful, broken people, and the two worst are the two main characters. Mostly you find yourself loving the flaws.
Posted by Bibliovore at 9:39 PM No comments: