Summary: Alex is a bruja, a witch. She doesn't want to be, but her magical gifts are passed down from her entire family, and the whole family is likewise looking forward to her deathday, the ceremony that will bring her into her full power as a bruja. So she knows that when she sabotages the ceremony in hopes of getting rid of her powers forever, people aren't going to be happy.

She didn't expect her entire family, living and dead, to get sucked into Los Lagos, the otherworld of powerful magic, strange creatures, and unfathomable rules. Now with the help of mysterious Nova, she's the only one who can get them back, using the very powers she was trying to escape.

With a fascinating mythology drawing on multiple Latin American traditions and beliefs, this is a whole new kind of fantasy.

First Impressions: The premise and the setting were amazing, the characterization not so much. But I did love some things about this.

Later On: I loved this world. I loved the complexity of her family dynamics, and the pressures on her from all sides to be something she's not particularly ready for. I loved the dangerous and mysterious world of Los Lagos, with the classic mythical trope of rules that our heroes don't know, but must abide by or pay the price.

I particularly loved that she is attracted to both bad-boy Nova and her BFF Rishi. While her own bisexuality seemed to be news to her, it was no big thing within the larger arc of the story.

My beef with the characterization is that everyone was pretty static and flat. While Alex was our main character, she was more of a conduit to narrate what was happening to her. Still, the world and the conflicts set up mean that I'll be back for the rest of the series.

More: Latinos in Kidlit
Smart Bitches, Trashy Books
Cuddlebuggery
An essay from the author, talking about the difficulties of writing a story that reflects her own background in fantasy, over at Diversity in YA
Posted by Bibliovore at 11:31 AM 1 comment: 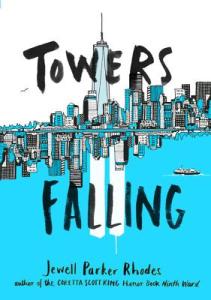 Summary: Deja doesn't know why she and her family have gone from bad to worse over the years, her father constantly losing jobs and sinking into deep depressions. Now they're at their lowest point yet, living in a shelter. But her new school is a boon, with new friends and a teacher who asks them to consider how history affects them personally. Is it possible that she could begin to understand the mystery of her father's illness?

The answer reaches back to a September morning, fifteen years ago.

First Impressions: This was SO HARD to read, and yet so wrenchingly honest. Wah.

Later On: With last year being the 15th anniversary of the 9/11 attacks, there was a little flurry of books published to tie into that, especially since kids in school now have little to no direct memory of it. At the same time, while the adults in their lives have this massive shared memory, it is still so swamped in pain that we find it difficult to talk about.

Rhodes riffs on this disconnect, and how it could lead to exactly Deja's situation where she has no awareness of the 9/11 attacks at all, and learning about it, even years after the fact, brings about the same wrenching emotions that we suffered watching it unfold live. (Just as many people saw it live on TV, she sees the airplanes slam into the towers in a YouTube video.) She also witnesses Islamophobia visited upon the family of her friend Sabeen, and realizes that this is another wound on the American psyche.

I also appreciated that ultimately, her father's physical illness and his mental illness are portrayed in the same way. Just as he can't help the days that he's coughing too hard to get out of bed (from breathing in the dust and debris on 9/11) he also can't help the days he can't get out of bed due to depression. Deja's revelations are not a panacea for either illness, but they do help her learn to understand her father better, and in that way their strained relationship starts to rebuild.

Like I said in my first impressions, this was hard to read, so it's very difficult to assess it. However, I do think the honesty of this book, its acknowledgement of pain and how it ripples outward even when it's something you never experienced yourself, will speak to kids, especially those living with the aftereffects of 9/11.

Posted by Bibliovore at 11:47 AM No comments: 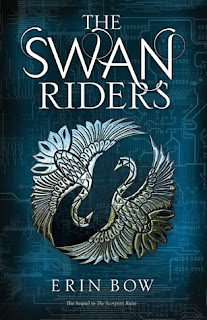 Summary: After sacrificing her humanity for the good of her people and the ones she loves, the once-Princess Greta journeys with the older AI and two of his Swan Riders across the Canadian wilderness, trying to make sense of how to live as an AI and still remain herself.

First Impressions: Slower-moving than the first one - I took several days to read it. But I loved its meditation on what it means to be human, and how you have be at least a little human to be a ruler.

Later On: This builds heavily on the first book - on the world that's been set up, on the horrors and terrors and various interpersonal relationships that were established. So it's best to read this after The Scorpion Rules.

In the first book, the Swan Riders lurked in the background, mostly just Tallis's horrifying, death-dealing minions. In this book, the histories and present lives of individual Swan Riders, as well as other functions they serve for Tallis, come to the fore. Though Greta is now an AI like Tallis (and presumably may make use of the Swan Riders herself), it is their secrets and the ways they keep their humanity that drive this book. Witnessing the slow unfurling of this information shows Greta how to navigate the increasingly tricky path of her new AI powers and abilities, while retaining her own humanity.

Tellingly, Greta realizes that one of the ways they keep their humanity is to keep a little bit back from Tallis - something that is solely theirs. And further, she realizes that in order to continue to lay claim to her own humanity, her own decency and sense of right and wrong on a micro level, she has to let them.

While slow and intricate and not for everyone, if you loved the Scorpion Rules, you should read this book.

More: School Library Journal
My review of The Scorpion Rules
Posted by Bibliovore at 12:02 PM 1 comment: