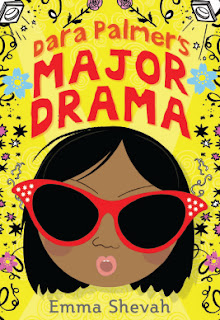 Summary: Horrors! Dara Palmer, in spite of being clearly destined for stardom, has been passed over for the part of Maria in the school production of The Sound of Music. How could they?! Is it because she doesn't look right? Is it because the drama teacher hates her? Well, no matter. Dara Palmer is going to be a star one way or the other.

First Impressions: This was a delightful stew of serious topics like adoption and identity and the loss of friends, blended with Dara's hyperdramatic and hilarious tone. It just went together so nicely.

Later On: Dara was adopted from Cambodia, and feels decidedly out of place in her family. Both her siblings are white (one adopted from Russia, one the biological child of their white British parents) and she feels like she sticks out wherever she goes, especially since she knows very little about the country where she was born. At the same time, she's conflicted over whether to probe more into Cambodia and her own past, feeling disloyal to her parents. And of course, at the same time she's being your typical tween girl, obsessed with her acting dreams, school, and friends.

It can be hard to like Dara at first. She's vain, self-centered, and severely lacking in self-awareness. (In other words, she's a pretty typical girl of her age.)

But she's also completely hilarious, and it's her slow awakening to the inner lives of others and her acknowledgement of her own complex and evolving identity that will win you over. And I love that this isn't a story solely about being adopted. Dara's struggles and triumphs are multi-faceted, just like her.

Summary: Disgraced and expelled from her exclusive private school at precisely the wrong time for her father's campaign, Kate finds herself banished to the tiny Texas burg where he was raised, She's a world away from everything familiar. But she's not going to let that stop her. Even in the middle of nowhere, she can still do some good - right?

First Impressions: This was at its best when it wasn't consciously trying to hit the beats of Emma. I liked that her political savvy both helped and hurt her.

Later On: I'm sure that the fact this was a contemporary retelling of Emma was why I requested this, but I'd forgotten that by the time I got around to reading. It wasn't until one very obvious parallel whacked me over the head that I remembered it. Like I said above, it worked best for me when it let go of slavish imitation of the original plot and focused instead on the theme - a well-meaning, somewhat overbearing girl learning more about herself and the people around her.

More: Kirkus
Posted by Bibliovore at 11:14 AM No comments:

Summary: Anglet is a chimney-climber, accustomed to risking her life on the rooftops, knowing she won't be mourned or even cleaned up if she falls to her death on the cobblestones. It's the risk you take. But when another chimney-climber plummets to his death under mysterious circumstances, she also knows she's the only one who's willing to figure out what really happened to him.

Threading her way through three very different and uneasily mixed societies, Ang will uncover a far bigger pit of snakes than even she was expecting.

First Impressions: As a mystery, it was decent, even if there was some Sudden Knowledge at the end. As a book about a girl navigating her racial/ethnic identity, not so much.

Later On: Ang's quest for the truth takes her through the highs and lows of a fantasy metropolis. The world she navigates, based on South Africa's mix of Dutch, Indian, and South African cultures, is one we haven't seen in fantasy before. The story, both in the plot and the world-building, clicked along in an interesting way, although an unsupported revelation came out of nowhere at the end and weakened the mystery somewhat.

However, my issue is with the portrayal of Ang moving within and around the culture she was born into. When she visits the area of town where she grew up, her tone is not that of someone visiting their estranged home and family, but instead an anthropologist. There's no clear emotional connection to the beliefs, the customs, and the surroundings of her origin, or what's left of her family. She might as well be talking about either of the other two cultures in the book.

While I can appreciate the narrative of alienation from your own culture (it's very close to my own experience), it felt like she'd never spent any time in that culture and was observing it from the outside. Given that she was supposedly struggling with this issue, and that something related to this was the great revelation at the end, this was a part of the book that fell flat for me.

More: Writing POC While White  an article by the author which shows that while they are conscious of the issues, it didn't translate very well to the page
Kirkus
Posted by Bibliovore at 11:28 AM No comments: