Book Review: Once Upon a Cool Motorcycle Dude by Kevin O'Malley 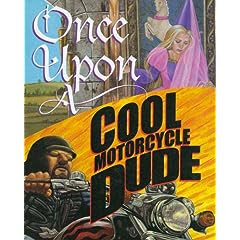 Book: Once Upon a Cool Motorcycle Dude

Once upon a time, there was a princess who had eight ponies she loved very much. (Oh, brother!) But one day, a terrible giant began stealing them, one by one! What’s a princess to do? What she really needs is . . . a cool motorcycle dude!

This book is just plain fun. The two storytellers each attempt to tell their own tale, but they influence each others’ versions until the story produced is something bigger than both of them. But don’t make the mistake of thinking they aren’t going to keep arguing!

I really liked the three different art styles used. It’s subtle, but it gets across not only an indication of which story is being told, but also the feel of each story. The girl’s story (by Carol Heyer) is all fine lines and delicate colors, a real fairy-tale look with the beginning scenes set mostly indoors. The boy’s story (Scott Goto) is in oils, darker colors and all outdoors. O’Malley himself works in a third, more comic-book style to show the two youthful narrators (who look to be in fourth or fifth grade).

This is a pretty fun book for all ages to sit down and read, but I can also see teachers using this book to discuss the writing process. The story changes as the boy and girl duke it out over whose character is coolest. There’s even an opening to discuss gender differences and how the stereotypes are twisted around as the story continues.

Kids of both genders in my library love this book, and you will too.
Posted by Bibliovore at 1:59 PM