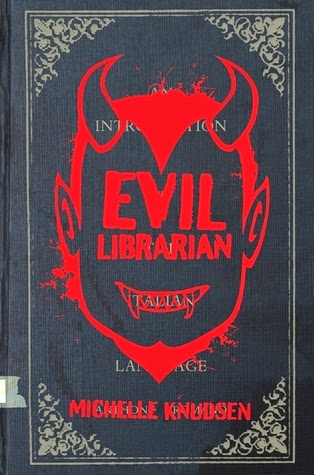 Cynthia doesn’t want much out of life, really. She wants the school production of Sweeney Todd to be the best ever. She wants super-cute Ryan Halsey to notice her. She wants to get through Italian class.

Now there’s something else to add to that list. She wants her best friend to stop acting like a zombie space cadet around the new librarian. Sure, he’s young and hot, but he’s still an adult and a teacher. Eww. And now Annie is swearing that she’s in love with him. Cyn knows there’s something seriously wrong with this picture. But she’s not prepared for the truth, which is that Mr. Gabriel is a demon who’s bent on sucking out the souls of the student population as part of his quest to rule hell.

Luckily, she’s got some advantages in this fight. Such as, she seems to have a resistance to demon mojo. Also, super-cute Ryan Halsey is actually helping her out. Still, that’s not much help against a demon. And now there’s more than one. Uh-oh.

With a title like that, you know I had to read it. I mean, come on. I’d gone through several DNFs before this one (at least one of them throw-it-at-the-wall bad) and I was ready for a funny, entertaining paranormal romp. This fit the bill.

Cynthia is smart and self-aware, but still recognizably a teenager. The plot rattles along with good humor and a certain wink at the reader as to the unlikeliness of this whole thing. At times the light and funny tone wavers, particularly with the deaths of several teachers. These are all off-screen, but at least one was an important ally to Ryan and Cyn. Still, this is 98% rollicking fun.

In her review, Ms. Yingling mentions that for her middle-school population, Cynthia’s lusty yearning for Ryan was a little too old. Myself, I liked that a lot. It’s a nice thing to see a teenage girl frankly acknowledging her sexuality and how that feeds into romantic feelings without being branded a slut or a bad girl.

Though the story is complete (no cliffhangers!) the door is also left open a crack for a sequel, or perhaps two.
Posted by Bibliovore at 12:41 PM