Book Review: Once Was a Time by Leila Sales 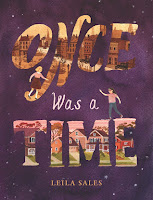 Summary: In 1940's Britain, Charlotte struggles to keep a stiff upper lip in the face of wartime privations. At the same time, she doesn't have it so bad - she has her best friend, Kitty.

But when she, Kitty, and her father are kidnapped by Nazis in an effort to find out the secrets of time travel, the war comes home in a terrible way. Charlotte jumps through time to save her life, and finds herself alone in early 2000s America. Adrift and lost, she learns to adjust to her new life - but she never stops missing the time and the people she left behind.

First Impressions: Awwww, this was so sad and yet so perfect. Sniff.

Later On: Honestly I kept expecting a magic time jump back to the 40s, everything fixed. When it didn't happen by the end of the book, it made me reframe the whole story. Charlotte's memories of her family and of Kitty fade over the years, until she's become a person they wouldn't recognize (even not accounting for the clohtes and hairstyle).

But a hint that Kitty might be out there, looking for her, brings her old self back and reminds her who she really is. This is a story about the things that change and the things that don't, and one of the things that doesn't change is the kind of friendship that reminds you who you really are.

Labels: book review, Leila Sales, Once Was a Time, tween