The Next Big Thing Has Feathers

Some time back, a blogger posted the question, what's the Next Big Thing? We're tired of vampires, so who gets the next ride on the hot-topic carousel? We said it would be werewolves, mummies, and zombies. Well, we got a little of each (though I'm still waiting for the swoony romantic novel with the bandage problems), but now it seems that angels are next on the list. An editor ponders the appeal over at PW:

“The young books like [Sharon Creech's The Unfinished Angel] are using angels to suggest the world can be a better place,” said Kate Jackson, editor-in-chief of HarperCollins Children's Books. In YA books, however, she believes angels “are a symbol of forbidden love. What's more forbidden than having a romance with someone who's not human?”

Not to mention he's got a really powerful boss.

I joke, but there do seem to be some swoony possibilities in 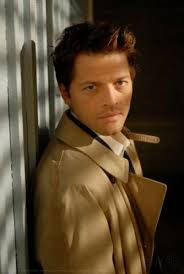 angels. About ten years ago, there was a little explosion of angels in romance novels. At the time, I couldn't fathom it, but now it makes sense. There's the fearsome goodness, for one. There's the hint of superpowers. There's the feeling that your love interest has a higher calling, and is involved in Big Things. Hopefully for the story, this means that you get mixed up in Big Things too. (Of course, all that's upended when the angel in question is fallen, and that's even more fun.) And anybody's who's seen Mischa Collins as the angel Castiel on the TV show "Supernatural" (you're welcome) knows that being angelic doesn't mean you're all fair and pasty and go around strumming the harp all day.

Will the vampires turn to dust? (Ha, see what I did there?) I'm sure all those trends from the first paragraph will hang on for awhile, especially as the New Moon adaptation comes out this fall. And of course, there is the caveat to every trend--a really good book, even if it's waaaay out there, is going to find its readers.

It could be vampires AND angels...like Eternal. Or Mortal Instruments, if you want to push it. Personally, I like Maggie Stiefvater's prediction...Kraken! although I don't think werewolves have really run their course yet.

Ooo, how could I have forgotten Eternal? Loved that book!