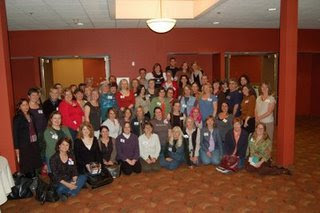 I was an idiot and left my camera upstairs until midway through the (first) Happy Hour. So this post will be augmented with pictures I've snatched from other bloggers.

The first session was a panel discussion with authors, bloggers, and a podcaster about bridging books and blogs. It included Mark Blevis (Just One More Book!), writers and Readergirlz Alice Pope, Dia Calhoun, and Lorie Ann Grover, and Betsy "Fuse #8" Bird. They talked about the ways blogs are working to publicize books (new and old). We even had a comment from Eric Kimmel (I know! That Eric Kimmel!). Big excitement.

The second was a presentation by Jackie Parker (Interactive Reader) and Colleen Mondor (Chasing Ray and Guy's Lit Wire), about doing group events like the Winter Blog Blast Tour. There was much snark and banter to be had, which Jackie assured me was not practiced or planned and was in fact the SOP whenever they're together, be it online or in person.

The next two sessions were breakouts, and I hit MotherReader's Better Blog session. Such was the appeal of this session that there were people sitting on the floor at her feet, like acolytes.

Immediately following, Jen Robinson, Sarah Stevenson, and Jackie Parker all ganged up to talk about how the Cybils will work, and to urge us to participate. I asked how effective the Cybils had been so far in their aim to recognize quality books with kid appeal, and Jen pointed out that teachers and librarians love the shortlists and publishers are actually putting "Cybils nominee!" in their catalogs. Hurrah! More on Cybilation in a later post.

Lunch was had at the hotel restaurant. I hung out with Deb Lund, Susan Blackaby, Christine Fletcher, Emily Whitman, Nancy Arruda, and Kim Baise, all authors and/or publishers. I did my fantastic impersonation of a ditzy fangirl for Christine Fletcher, whose historical YA Ten Cents a Dance I just finished last week and loved.

The afternoon kicked off with a discussion between Jen Robinson and Laini Taylor about the relationship between authors and reviewers. Another blog (Sara Ryan's, I believe) pointed out that what Jen was saying about how authors and publicists should approach reviewers was incredibly similar to what common wisdom says about unpublished authors approaching editors. Find out what we like. Don't just send things blindly. Don't pester with "have you read the book yet?" Interestink.

Greg Pincus taught us all how to optimize our blogs for the happy accident using tagging, proper post titling, and social networking. Look for me to become downright obnoxious on Facebook now.

I stopped into the Group Blog session with the Class of 2k8 and 2k9, which by the way is about the most interesting and efficient method I've ever seen of doing lots and lots of homegrown publicity. I know I've got books in my Blue Journal that I might not have even heard of if the Classes of 2k8/9 weren't around.

The last structured event for the day was the author meet and greet. I scored books from Alma Alexander (ee!), Clare Bell, Matthew Holm, Zu Vincent, and April Henry. These went into my bag to nestle next to the books I'd gotten earlier from Barbara Shoup and Emily Wing Smith. Not to make you envious or anything.

Hi, bibliovore! I've lurked here, but inspired by Kidlit 08, now I'm coming out of the shadows into the light. I had such fun talking with you at the conference--the fangirldom is mutual!

Hi Maureen, I like all your newly inspired ideas! We had such a great time talking books and life. Looking forward to reading Kid Tested, Librarian Approved!

Oh, I'm just full of myself enough to really enjoy the thought that people were sitting at my feet "like acolytes." Made me laugh - and pat myself on the back.

It was great to finally meet you in person and hang out all the live-long day.