Tucson isn't exactly a hotbed of author visits, at least not when the Tucson Festival of Books isn't afoot, but on the 20th, I got to see authors Lisa McMann and Robin Brande at a local Barnes and Noble.

Robin started off the festivities by noting that whatever they said about each other, they were not being secretly bitchy. Well, no more than usual. They promptly attempted to out-diva each other for the whole presentation, to the merriment of all. (We as a society don't use the word merriment nearly enough, don't you agree?)

Lisa started things off by talking about a couple of books upcoming now that the Wake trilogy is finished. Besides Gone, she has a standalone scheduled for early next year, called Cryer's Cross, described as a "paranormal thriller with a love story." Ooo.

She also read from a book called The Unwanteds, due out in the fall of 2011. It's a dystopia (already loving it) about a society that suppresses creativity and purges unwanted children at the age of 13. Uh-oh. Having heard the first scene, I really want it to be 2011 now!

Robin read a hilarious and pivotal scene from her most recent novel, Fat Cat. After some pressure from the audience, she told us that her next book would be called Parallelograms, about a girl who creates an interdimensional portal and meets her parallel universe self! (Gosh, that happened to me last week.) Now, either I wasn't fast enough on the iPod's keyboard or Robin never said, but I don't know when that'll be out.

After those hijinks, Lisa and Robin asked each other questions. Some of them were covered by the cone of silence, but we learned about their writing habits, their earliest attempts at writing, and how long it took for them to get published. In response to some questions from the audience, Robin and Lisa both talked about writing, the craft side and the business side.

To finish things off, they signed books and talked to fans and posed for divalicious photo ops. Thanks, ladies! 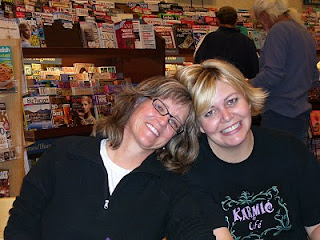 Posted by Bibliovore at 8:55 PM

Excited for The Unwanteds too!

Sounds like an excellent event. Glad you were able to attend. This was a nice writeup, too. You give a flavor for the event, and all of the useful information, without overwhelming people who didn't get to go. Thanks!

I love these ladies. Wish I could have been there. Great picture!